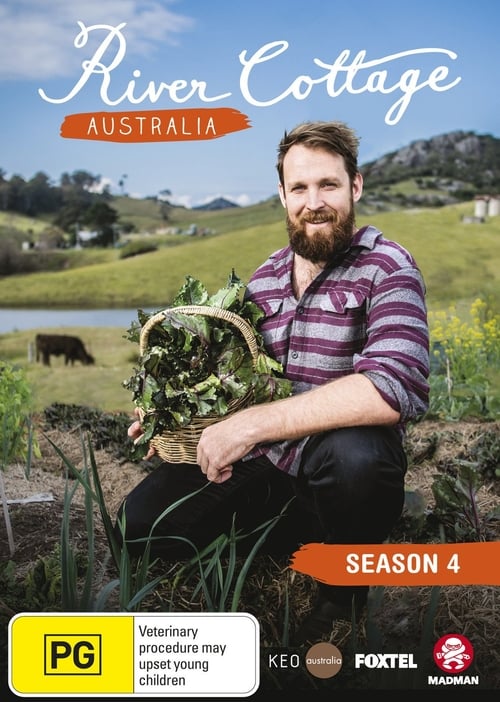 Paul West is welcoming eager cooks and wannabe-farmers to teach them the River Cottage lifestyle in an all new season. But it's not just visitors to the farm that Paul's welcomed, he also became a first-time Dad to son, Otto, so to help run the farm and the Cooking School he's taken on an apprentice, a local guy named, Harrison.

As a way of celebrating the talent, artists and producers in the area, Paul hosts a huge field day on the farm. Paul proves he's not afraid to strip down for fashion before wowing the crowd with a special tribute to Tilba.

Back on the farm it's time to make some much needed changes. Digger brings joy to some people in need. Darcy returns to solve a long time problem on the farm - can they get the water from the dam to all the gardens and livestock?

Still in the Riverina, Paul visits a wheat-farming mate who has changed the future of his town with beer. At the Wagga Wagga farmers markets, Paul uses produce he's gathered to create an afternoon tea that delights the shoppers.

Paul heads to Griffith and Narrandera and meets up with inspirational farmers who have reinvented themselves to survive. Can the knowledge he's gained apply to his own patch of paradise in Tilba?

While Paul is away Harrison is left to manage the farm. There's a sweet surprise ready for harvest that's been brewing for over a year, and Paul rises to the challenge at a community event that makes him sweat for his supper.

After ironing out some of the food van fumbles, Paul drives it over the mountains and into the "big smoke". In Canberra, he's overwhelmed by the urban growers he meets along the way and challenges the van to its ultimate test.

Paul gets important advice on how to transform the farm's future. Digger is reunited with someone very special and Paul bravely takes his food truck for its first test run at the local farmers markets but he's a little unprepared!

In the last year Paul's family has grown and so he employs a local guy called Harrison as his part-time farm hand. With the fencing an on going issue for Paul he finds a way to change the face & shape of the farm. Paul has grand plans to take his food message on the road with a retrofitted Food Van but has he bitten off more than he can chew?