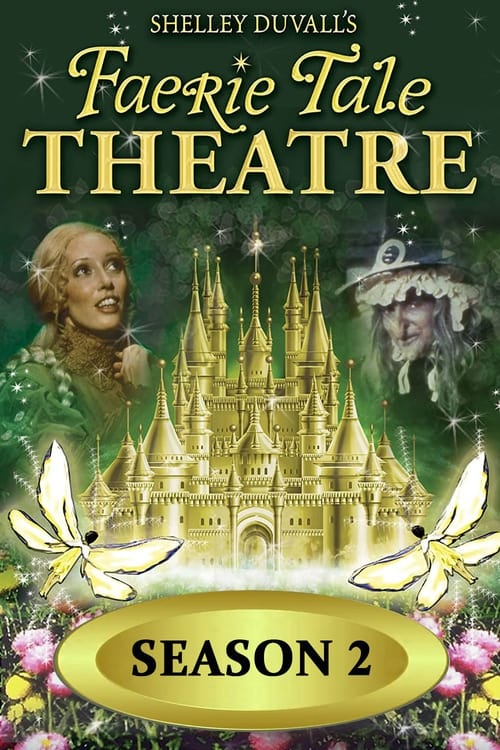 A mean and selfish stepmother convinces her husband that if they are to keep from starving he must abandon his children in the woods. Lost and Hungry the children come across a wonderful gingerbread cottage covered with candy and icing. Unknown to them the house is owned by an evil witch who uses it to trap boys and girls lost in the wood. She captures the children with the intent on baking them up in her oven-- but Gretal decides to try some home cooking herself!

Mary Steenburgen encounters a surprise on the trip to grandmas -- he has big eyes - big ears and a set of sparkling Razor sharp teeth. He has decided to take an extra liking to "Miss Hood" as he accompanies her on her trip through the forest. He hasn't counted on the cunning and ever-sweet Granny nor has he thought about what danger he might be in from Miss hoods admirer -- all in all the vain wolf learns that humans are just as cunning.

Fe-Fi-Fo-Fum... Remember the shivers you felt from the giants cry when you were a child? Now in this delightful production of Jack and the Beanstalk, a marvelous script and magical special effects recreate the adventure. Dennis Christopher is the idealistic hero who trades a cow for magic beans, then climbs the resulting beanstalk and stumbles onto an incredible adventure. A large part of that adventure is an encounter with Jean Stapleton and Elliot Gould, a giant husband and wife time that make this one of the most memorable episodes.

Christopher Reeves and Bernadette Peters star in this charming adaption of the classic story, an evil witch puts a curse on a beautiful princess which entails that by her 16th birthday she will stick her finger on the spindle of a spinning wheel and die!!, the curse is somewhat lifted by a good fairy so that instead of death it is sleep. When the evil curse comes true the good fairy puts a spell on the castle to place everyone asleep until the princess is wakened by loves first kiss.

Cathay, a kingdom with harmony and peace. A simple kitchen maid, whose mother is very sick, learns of magical faeries and a root that can cure even the worst disease. She also comes across a beautiful bird, the nightingale, that she soon falls in love with its song. The emperor, is unpleased to learn that his great and vast palace does not completly please the poets, rather a simple bird, the nightingale, does. His royal court gets the bird, with the help of the kitchen maid, and the emperor is very pleased. After a while, an artificial bird is given to the emperor as a gift. He banishes the other the nightingale. But when the artificial bird breaks, he suddenly becomes deathly ill. It's up to the nightingale to save him, but will she after he banished her? Mick Jagger portrays the emperor very well, Barbara Hershey is superb as the kitchen maid, and Edward James Olomos is great as the prime minister. The Nightingale has a great message and great fun!

From High atop a tower, a beautiful young woman lets down her hair - and lets in love. Thats the time-honored story of Rapunzel. Shelly Duvall, producer of the entire Faerie Tale Theatre series of which Rapunzel is a part , stars as the maiden.Jeff Bridges is the prince who climbs to Rapunzel's balcony via her long , long hair.And Gena Rowlands is the lovely, but wicked witch who tries to keep them apart.