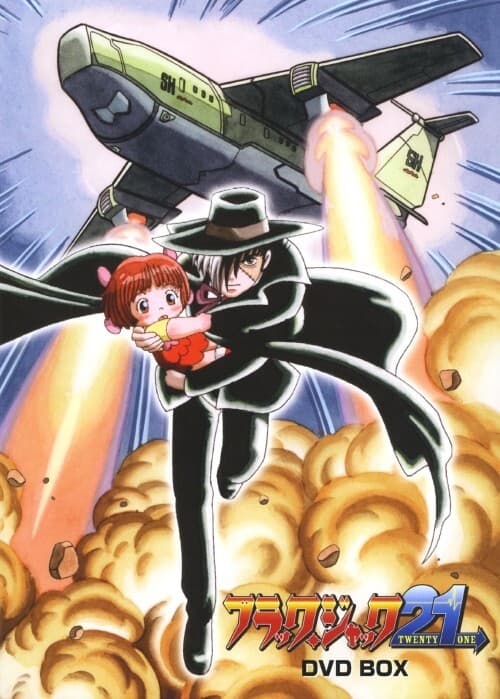 Black Jack tells Dr. White to change course to the North Pole, meanwhile Renka start her plan in getting the Phoenix Disease. Later the Sky Hospital receives a call from the US Alaska base, and are told that Doctors from all the world are trying to find the cure to the Phoenix Disease, one of them being Dr. Kuma revealing that they only have 21 hours to cure or die. The National Security manager is told that they are going to launch a Nuclear Missile to rid of the Virus and as well of those ill from it. Renka gets on the Sky Hospital. Just before Renka about to shot Black Jack, her father interfere, they both shot each other, Zen Mantoku died and Renka injured badly, Black Jack decided to operate Renka, anyway. When operating Renka Black Jack finds the cure to the Phoenix Disease. The missile has been shot without any way to making it to don't crash on North Pole. While the Phoenix Disease continues to spread in Black Jack's body, he questions himself why he is saving Renka's life.

Black Jack is ready to go Japan with Pinoko when is requested to go to the Sky Hospital and check on Zen Mantoku who has Phoenix Disease, by a direct request of Dr. White & Renka. Black Jack agrees in performing the operation with Dr. White. Renka secretly plots to get the Disease cure so she can win much money when she spreades Phoenix disease. One of Renka's henchmen tries to hijack the Hospital and by that Mantoku gets out of the Capsule causing the Phoenix Disease to spread among the aircraft. Now Black Jack has to face the Phoenix Disease to save Pinoko and the others lives.

Black Jack is called by Renka, he thinks that about his father but she says she want him to stay and be a family, but Renka's daughter thinks Black Jack is after his father's fortune. When about operating on his father, the organization henchmen kidnap Pinoko and lure him in a trap, in which he gives up the pendant. Benitokage appears and saves the day, apparently because one of the Organization knocks Black Jack and then he awakes to meet Zen Mantoku the former leader. He tells that the reason of his father to leave Black Jack and his mother was to protect them from the Organization (meaning the bomb that near killed Black Jack was a plot of the organization) it is revealed who Benitokage is, and then both of them work together to escape. At the end Black Jack is aimed with a Sniper Rifle in which Benitokage saves his life using her.

Black Jack and Pinoko arrive into Okonja Village on a helicopter. However, many villagers have already died from various diseases. Black Jack persuades the reluctant pilot to fly further towards Arnol Village.

Black Jack and Pinoko run into Sharaku when they arrive in Africa. They meet a boy named Al.

Black Jack is now in Canada. He goes into the mountains to find Dr. Jorujyu's research lab. The Lady that has been trying to kill him was injured and he decided to helper. An avalanche suddenly happens and traps all three of them in the cellar. The document that he finally finds, that was about the phoenix disease, ends up being lost in the snow.

Black Jack arrives at the cottege that Dr. Jorujyu was living in but gets shot at by the Dr's daughter. The brother was out to kill the Dr. But does not succeed. Dr. Jorujyu has the phoenix disease and dies from it.

Black Jack and Pinoko travel to New York. A doctor who happens to be the son of an old friend of Black Jack's parents, asks Black Jack to help him operate on his mother because she has Honma's Hematoma. Black Jack, remembering his mentor's words not to get involved in that disease, refuses. Later, Black Jack discovers the clock that was in the photo he found. Benitokage shows up and shoots Black Jack in the heart.

Black Jack finally arrives in England to hear of a man who's been in a coma, unaged, for 65 years. Dr. Stein wants to analyse him to find out why he hasn't aged, thinking it will give them information about eternal youth; but the patient's niece has hired Kiriko to put an end to it. Black Jack operates, but afterwards the patient ages and dies upon finding out that his family had died.

Black Jack and Pinoco go to a middle eastern town after leaving the damaged Sky Hospital. While there, Black Jack is arrested and accused of murder. He is cleared of the charges thanks to a Japanese businessman named Aritani. Black Jack makes an agreement with Aritani, saying that he would repay the favor. Later, Aritani is convinced to take the fall for his company which was funneling money illegally. After claiming to be responsible for the dirty play, Aritani is thrown in front of a train in an assassination attempt disguised as a murder. Desperate to save Aritani's life, Black Jack uses some of his savings to buy out the hospital Aritani was being kept at after he inspires the proper owner with his determination. Black Jack saves Aritani and receives his first real lead on the group after his life.

With the help of a woman doctor named Ayako, Black Jack attempts to reach England by riding in the Sky Hospital, a military aircraft that had been converted into a fully functioning clinic. While he is on board, a pack of rogue militants hijack the plane, interested in turning it back into a fighting craft. Though the passengers and crew of the plane resist the terrorists, one of them detonates a stun grenade in the cockpit. The pilots and one of the terrorists are badly injured by shrapnel generated by the grenade, and the plane itself begins losing fuel. Black Jack and the planes owner, Dr. White, are forced to try and save the lives of the injured people and safely land the damaged Sky Hospital.

After seeing him at Kreutzer's hospital, Black Jack goes after Dr. Stein, a major leading expert on prosthetic limbs and organ transplants. Black Jack also encounters a woman whom he was familiar with. He discovers that Stein was about to perform an operation that would attach an experimental robotic arm to an aspiring pianist. Black Jack fails to get any answers from Dr. Stein, but does talk to the boy who was about to receive the robotic arm. Black Jack talks to the boy that was about to receive the new arm. The boy admits that he didn't want the robotic arm which would enable him to play the piano with simple thought but would rather keep his human arm and learn to play the hard way. Black Jack saves the boys arm, and then attempts to follow Dr. Stein to England.

Black Jack and Pinoko go to Europe trying to track down Dr Kreutzer, a man that Black Jack recognized in the photograph he found at Honma's clinic, which was his only lead on the people that tried to kill him. While at a hospital run by Kreutuzer, Black Jack runs into a little girl named Suzie who mistakes Black Jack for the devil because of his black clothing. Black Jack befriends the girl later and enters the hospital, where he finds out that Kreutzer was in a persistent vegetative state after a car accident. Black Jack is asked to imitate Dr. Kreutuzer and perform an operation on a cancer patient. At first Black Jack refuses, though he later accepts the job once Pinoko reveals to him that the patient he was asked to work on was the little girls mother.

Pinoko, refusing to believe that Black Jack is dead, continues to try and dig through the rubble of their bombed out house. For a while, she lives in the diner owned by Black Jack's friend Tetsu, but is later adopted by a family that runs a local hospital. Pinoko still rejects her predicament, and later spots someone in a black cloak, similar to the one Black Jack wore. It is then revealed that Black Jack had survived the bomb blast thanks to help from his whale friend Torition. Black Jack went into hiding to prevent putting Pinoko in danger in case the group that was after him tried another assassination attempt, though he later comes out of hiding and takes Pinoko with him when he discovers an old picture in the clinic once owned by Dr. Honma, Black Jack's mentor.

Black Jack's father contacts him for the first time in 21 years and asks Black Jack to perform plastic surgery on his second wife. Black Jack, still holding a grudge on his father for walking out on him and his mother when they were injured in a bombing, does the surgery under the instructions to make the woman "The most beautiful woman alive." Black Jack constructs her face to look like his late mothers. After he arrives at his house, a bomb detonates, much in the same way that happened to him when he was a boy.

Black Jack is given a chance to redeem his medical license, but refuses and is arrested. During Black Jack's imprisonment, an Italian billionaire who was encountered in the other series begs Black Jack to save his grandson, knowing that Black Jack was the only doctor with the necessary talents. The head of the medical association in Japan refuses to release Black Jack despite the billionaires attempt at bribery, and the operation is taken on by Dr. White who attempts to do the operation using a robotic surgical aid. The billionaire visits Black Jack in jail and tells him of the boys miraculous recovery, but Black Jack states that the recovery was too dramatic, and the boy dies anyway. Enraged at the death of his grandson, the billionaire puts out a hit on the son of the head of the medical association. Black Jack is released from prison and ordered to save the boy.