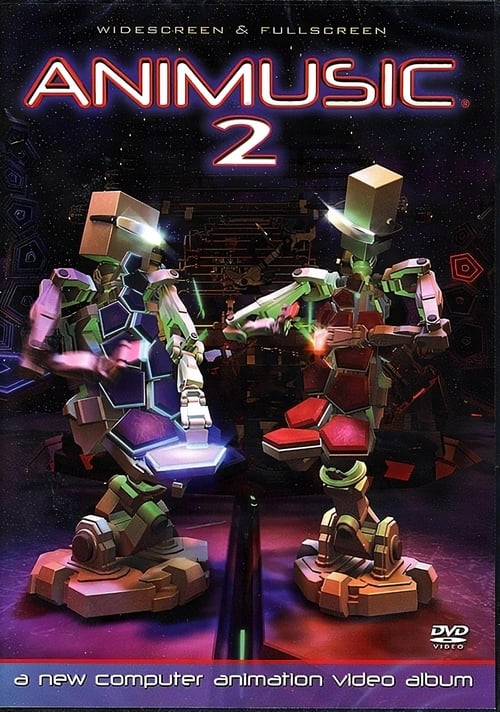 Animusic draws you into its reality like no place you have ever been. You encounter new dimensions of sight and sound as you experience seven unique visual concerts.

The closing Finale: Set atop an ancient mountain-top monument on a planet far from here... A massive stone grid comes alive with plasma-emitting satellite dishes, lasers, and percussion rings. We could say the music was out of this world, but it actually may just be from the 80's. Set on a peak in the mountains, the piece is performed on an Aztec-like pyramid, with a long series of small stairs leading up to it. The performance starts with the blue chorus beams appearing to trigger the transformation of the pyramid into the musical temple. At least three other planets or moons can be seen in the sky, one of which bears a strong resemblance to the planet Jupiter.

There are three robotic drummer players in this animation. The first one is inside a spherical cage of percussion instruments with limited movement along a straight pole. The other two "satellite" players move around the outside of the drum kit along two large circular tracks. This animation has 171 drums, cymbals, and other pieces in total. They are deployed and connected to the main kit over time in different sections.

An organic set resembling the bridge of an alien spacecraft pumps out plasma-enfused prog-techno. The strobed light show (probably) has invisible aliens tapping their feet. We think. Or something. The animation is set in a room bounded by alienistic dark green pipes, with colored tubes and pads that play when light flows through them from fiber-optic cables. The light flows through the cables at a visible speed, and so the cables probably are filled with supercold matter, called a Bose-Einstein condensate, which slows light down to a visible speed. The fact that the drums actually interact with these packets of lights is most likely due to there being glowing matter instead of light coming through their cables, which solidifies on contact with air, and evaporates on impact.

As Pipe Dream was by far the favorite from Animusic 1, the instruments return in Pipe Dream 2 – aged and a bit more dented. Out comes a manic tune with even more ball bearings flying everywhere. Instruments from the original play on a room completely surrounded by pipes. They are all played by ball bearings that shoot out of certain pipes.

Instruments set inside a cathedral play three movements of Mussorgsky's "Pictures at an Exhibition" played on a light-beam pipe organ with drums, bass, many other instruments... and pyrotechnics! These sections include "Promenade" and parts of "Hut on Fowls Legs" or "Baba Yaga" and "The Great Gate of Kiev."

Resonant Chamber is a very mellow song from Animusic 2. It could be the follow-up of Aqua Harp. It is a purely acoustic piece performed by a complex multi-neck stringed instrument. Set in a peaceful inner chamber, high in a sky somewhere, a different moon is seen out each window.

The Stick bass from Animusic 1 returns as an upgraded model: sporting wheels and double strings. He brings friends and cousins who cruise the wooden tracks playing on 3 separate stages and passing thru 3 tunnels all in the course of one tune.

The stars of the DVD (gracing the cover and the menus), a robot band kicks out an odd-time, laser-infused techno-rock tune while riding on top of their musical starship.