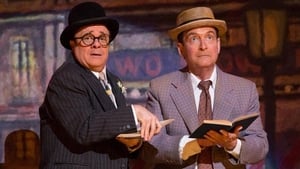 Nathan Lane gives the performance of a lifetime as Chauncey Miles, who faces a changing world and his own self-loathing in 1930s New York.

The New York Philharmonic’s acclaimed production of Stephen Sondheim’s iconic musical thriller Sweeney Todd: The Demon Barber of Fleet Street, staged in March 2014 to a sold-out crowd at Avery Fisher Hall, tells the story of a barber who, with his romantically inclined landlady, Mrs. Lovett the piemaker, seeks vengeance on what he considers a merciless world. The remarkable cast features bass-baritone Bryn Terfel in the title role and Academy Award-winning actress Emma Thompson as Mrs. Lovett, with Christian Borle and many more. Multi-Tony Award-winner Audra McDonald hosts.

Hailing from Muscle Shoals, Alabama, one of the meccas of American music, Jason Isbell is creating a sound that expands on his roots and cuts close to the bone. His songs are drawn from his own past and the stories of others he’s encountered. But they also speak of “moving forward” and of the possibility of redemption – qualities you suspect he knows something about.

James Naughton has played his fair share of scoundrels, lotharios and would-be legends. Tonight, he takes on the work of Randy Newman, who specializes in just those sorts of characters. Naughton serves up all of Newman’s sardonic wit, but don’t be surprised if this two-time Tony Award winner also gets you rooting for these characters.

She received rave reviews – and a Tony Award – for her performance in Broadway’s revival of "Pippin." Soon she’ll be featured in the next installment of “The Hunger Games.” Tonight you’ll hear how she got from Pageland, South Carolina, to a starring role on Broadway, told in songs ranging from Sondheim to "Sister Act."

This year’s Richard Tucker Foundation Gala — a perennial highlight of the opera season — celebrates Richard Tucker’s centennial with performances by many of the world’s greatest voices and a salute to this year’s award winner, Isabel Leonard.