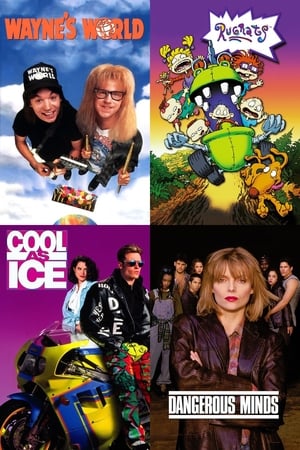 A list of films that are the epitome of 1990s culture, fashion and influences. These are films that cash-in on trends e.g. clubbing\dance music (Human Traffic), eco warrior themes (Ferngully). Of course we have "classic" kids films that have dated but have never been forgotten (Mighty Ducks, Free Willy, Harriet The Spy), a lot of Jim Carrey, Michael Jordan and Hulk Hogan films as they were major stars of the time, a few Hip-Hop films, Video Game films (Mortal Kombat, Streetfighter), technology that was cutting edge at the time, but now dated (Lawnmower Man - a film sold on its graphics, Hackers, You've Got Mail - a film sold on the premise of email), some box office smashes (Jurassic Park, True Lies), bad fashions (Enchino Man, Mo Money, Cool as Ice), star vehicles for pop stars (Cool As Ice, Spice World). Goldeneye is included as the N64 game spin-off was huge and the film helped breath life back into the franchise. Titanic isn't included as it is a period drama. Take a trip down memory lane as we go back to the past.