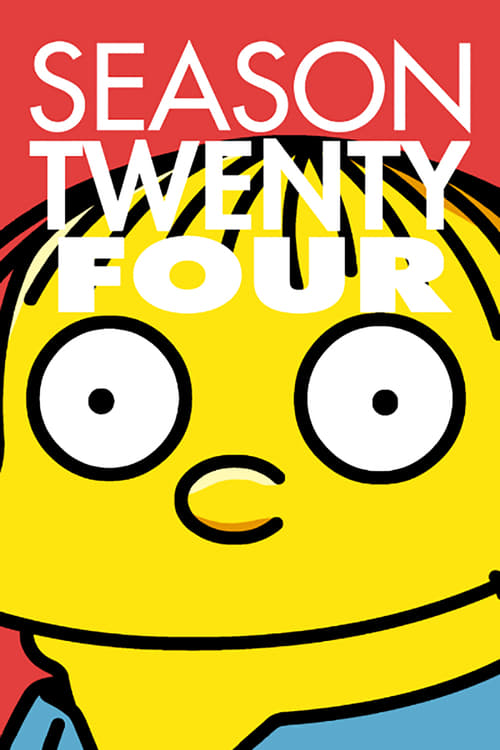 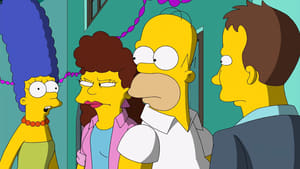 When Marge tries to buy Homer snack cakes for their anniversary, she winds up meeting a married man who shares a common love of British Television. Ignorant of all, Homer attempts to secretly construct a romantic anniversary train in the Simpsons back yard. 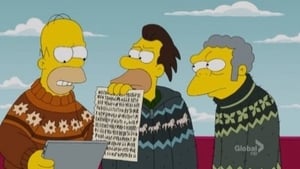 Homer, Moe, Lenny and Carl win $200,000 in the Springfield Lottery. But when Carl takes off to Iceland – his homeland – with all the winnings, the guys embark on a Nordic adventure to get the cash back. 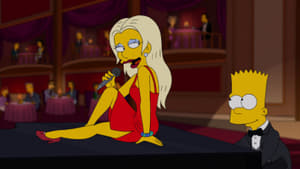 Marge encourages Bart to explore his creative side, and his initial reticence quickly subsides when she hires Slava’s beautiful daughter, Zhenya, as his new piano instructor. Homer is shocked when he loses the last two hairs on his head, and employs a wide variety of headgear to try and keep his new found baldness a secret from Marge. 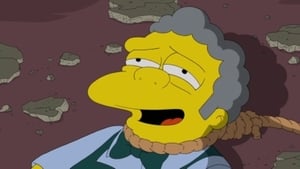 Moe is flying high after venture capitalists take a shine to his homemade whiskey, while Grampa, after injuring himself babysitting Bart, decides he'd rather be looked after by his grandson than be at the nursing home. Also, Lisa voices her displeasure at a hologram of music legend Bleeding Gums Murphy, and Sonny Rollins (as himself) shows up to ask her to stop all that jazz about boycotting a record label. 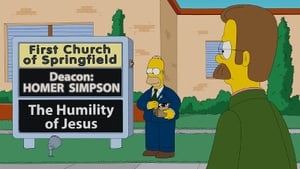 Homer is recruited to be a deacon by the cutting-edge new pastor. The dry cleaner mistakenly switches Marge's wedding dress for one of Krusty's costumes. 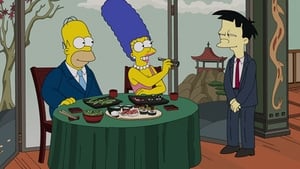 Homer's behavior once again lands him in hot water with Marge and he needs to fathom a way to save his marriage, while a dose of "A Streetcar Named Desire" drives Milhouse to affect a Marlon Brando-esque bad-boy demeanor in an effort to impress Lisa. 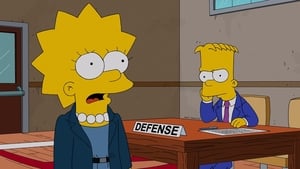 Springfield's Easter is ruined by a prank and all fingers point to Bart. It is up to Lisa to save her brother, in a student court presided over by Attorney General Janet Reno. Meanwhile, inspired by an old comic book, Mr. Burns becomes an ineffectual superhero—fruit bat man. 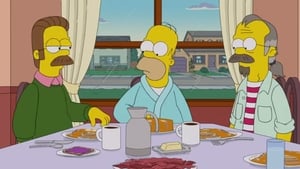 When Flanders' parents prove to prefer Homer's company to his, he jealously responds by giving Homer a shiner, and then tries desperately to reconcile with him. Meanwhile, Lisa is at a loss to understand why a new substitute teacher is bullying her for no obvious reason. 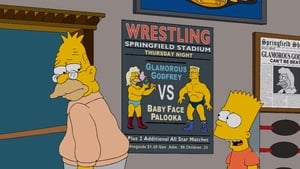 Homer's obsession with the TV show "Storage Battles" leads the family to discover Grampa's past identity as "Gorgeous Godfrey," the most feared, villainous man in pro-wrestling history 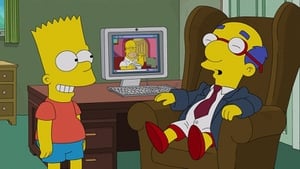 Bart and Milhouse explore the perks of adulthood following a shaving experiment. 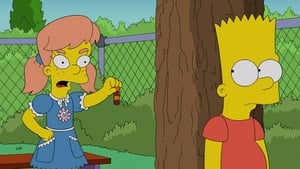 Bart's dream girl, Mary Spuckler, comes to town, but his failure to pay her enough attention is having a negative impact on their relationship. Meanwhile, Homer once again runs afoul of Marge and lands in the doghouse. 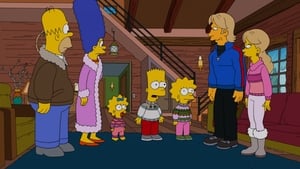 A tornado touches down in Springfield which sucks up Santa's Little Helper. While Homer and Marge are out looking for the family dog, the tornado strikes again and almost takes Marge and Homer. Marge is distraught about the kids and decide to pick a guardian to care for the children. 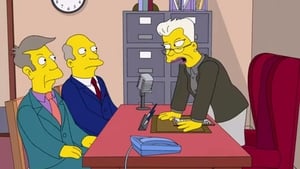 The fate of Springfield Elementary rests on Bart and his test scores, and Homer finds way to make money with his own parking meter. 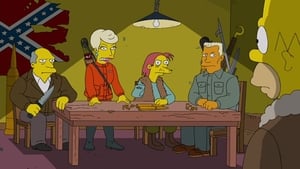 Homer joins the "Springfield Preppers," an off-the-grid survivalist group whose leader has set up a top-secret retreat outside of town to prepare for the end of the world. 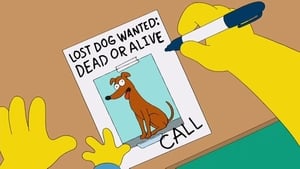 Grampa has to move into the Simpsons house following a fire at the retirement home, and on moving day, Homer 'throws his back out' and 'rests' at home. He later finds an advert for a video game, Villageville on his myPad, and starts playing. During that time, Homer loses Santa's Little Helper. When the family find him, Homer doesn't seem to care because he's "not a dog person". Grampa later tells the rest of the family the story of Homer's childhood companion, pet dog Bongo. 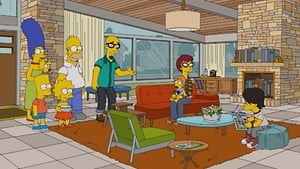 A "cool family" from Portland moves in next door to the Simpsons. Homer is desperate to befriend them, while Marge is skeptical, thinking that being cool is not all it's cracked up to be. 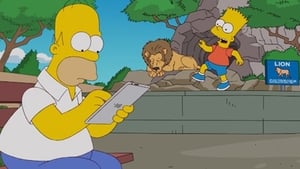 Homer wins a MyPad at the school auction and Steve Mobbs, who is now in heaven, talks to Homer through it. Homer goes into a funk when he breaks the myPad, until Ned Flanders discovers a miracle tree in the Simpsons' back garden. 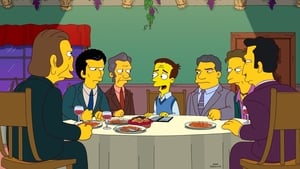 Homer is shocked to discover that his bowling teammate is an accountant for Fat Tony and his mob. When Fat Tony gets jury duty, he appoints Dan as the temporary don of the mafia. Meanwhile, Lisa adds insects to her vegetarian diet after she passes out in the middle of a saxophone solo, but starts questioning her decision when bugs start pleading for mercy in her dreams. 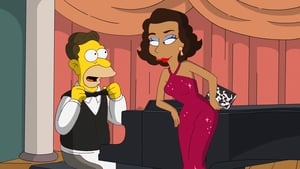 Homer and Marge try to track down Grampa by following clues that lead to secrets from his past. 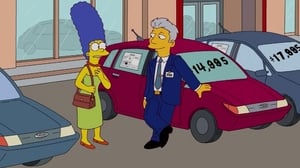 When Marge's car falls into a sink hole, she buys the perfect replacement to fit her family of five. But she quickly grows to hate it because, as she tells a shocked Homer, the car would be too small if she wanted to have another baby. Meanwhile, Bart and his friends are determined to find out what secret Lisa is keeping when Bart finds her cryptic messages and follows her sneaking off downtown for covert meetings after school. 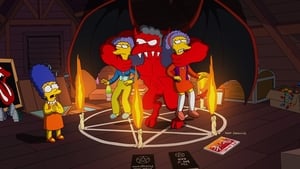 A black hole threatens to swallow Springfield, Homer tries to find the source of paranormal activity, and a "Back to the Future" parody in which Bart keeps Marge from marrying Homer. 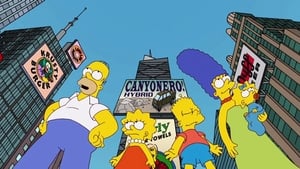 Bart will be visited by many of his past girlfriends.